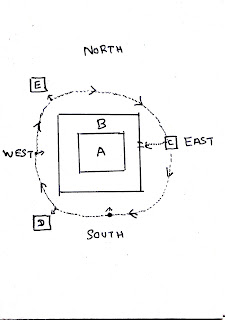 This is our journey to Śri Cakrā. We stand miles away from Śri Cakrā. We are able to see three huge mountains and another mountain (the fourth one) which is much bigger than the other three. The highest mountain, known as Mahā Meru (Supreme Mountain) is in the middle, which is the Abode of Parāśakti. Towards its eastern side, there is Brahma loka, (world of Brahmā) marked as C in the diagram. Towards southwest, there is Viṣṇu loka (world of Viṣṇu) marked as D in the diagram. Towards northwest, there is Rudra loka (world of Rudra), marked as E in the diagram. B and A in the diagram refer to Śri Nagara and Śri Cakrā respectively. Dotted lines represent the route we take, for our journey to Śri Cakrā. Out of the four mountains, we are able to see Mahā Meru glittering, as it is made up of gold. All the constructions in Mahā Meru were planned and executed by Viśvakarman, divine creative architect. He is also referred in Vedas. Ṛg Veda (X.81.2) says, “…..the universal architect, seeing all, creates the earth and creates the heaven with His might.”

Now we are standing near Brahma loka (marked as C in the image), which is situated in the east of Meru Mountain. We begin our journey from here. First we worship the world of Brahmā, but we do not enter this world, as we will be worshipping Him in Śri Nagara. Standing before the world of Brahmā, we worship Mahā Meru from its eastern side. Now, we move towards southern side of Mahā Meru and worship Mahā Meru from its southern side. Then we move towards southwestern side, known as niṛti (niṛti means destruction, dissolution, calamity, etc). Here we see the world of Viṣṇu. Without entering into the world of Viṣṇu, we continue our journey towards west. We worship Mahā Meru from its western side and proceed towards northwestern side, known as Vāyu cardinal, where we are able to see Rudra loka, the world of Rudra. We do not enter into Rudral loka. After worshipping Rudra loka, we proceed to the point where we have commenced our journey, the eastern side of Mahā Meru, where Brahma loka is situated.

We now enter Śri Nagara, which has twenty five forts (marked as B in the chart). We can reach Śri Cakrā only after passing through these twenty five huge forts, running into several thousand miles each. There are forests between any two forts, where many gods and goddesses perpetually worshipParāśakti. First we enter through the huge entrance gate of the fort made of iron. (Description of length, breadth and all other measurements are omitted.) When we crossed the iron fort, we reach the huge exit gates of the iron fort, we are able to see huge bronze fort, several miles away. Once we exit through the exit gates of iron fort, we see a huge forest consisting of fruit bearing trees, flower trees, etc. We are able to see huge fruits hanging from the trees and the fragrance of flowers grown in trees and shrubs give us divine feeling. We are also able to see a lot of birds like peacocks, parrots, etc. We listen to the hissing sound of several types of bees. In the midst of this dense forest, there are several rivers and lakes, where several varieties of lotus flowers have fully blossomed. On the side of these huge rivers, we are able to see huge palaces. Out of many palaces, we are able to see a huge palace and we walk towards that palace with great reverence. We walk through the main gates of the palace to reach the middle of the palace where, we are able to have darśan of Mahākālā embracing Bhadrakālī, who is dark blue in complexion. We worship both of them, take their blessings and proceed towards the entry gate of the bronze fort.

We now enter the bronze fort, whose length is beyond description. After walking through this fort, we reach the exit gates and come out. Once we stand in the open, we see a huge fort made of copper, several miles away. Before we proceed to the entry gates of copper fort, we go around the forest garden situated between bronze and copper forts. This forest/garden is known as forest of kalpavṛkṣa-s, the forest of divine tree known as kalpavṛkṣa. There are a number of long and broad rivers and lakes. In the midst of this forest, we see Vasantaṛtunāthan, the one who presides over vasantaṛtu (ṛtu means bi-solar months based on seasons and one year has six ṛtu-s, each comprising of two solar months). He is seen with his two wives Madhuśrī and Mādhavaśrī. Vasantaṛtunāthan (he presides over spring season) holds an astra (weapon) made of flowers.  After worshipping him, we go around this forest and come to the entrance gates of the next fort, the copper fort.

We enter the copper fort, which is the third fort from the beginning. This fort is also equally lengthy and after walking through this fort, we reach the exit gates and pass through them to come to another open space. From here, we are able to see a huge lead fort several miles away. Between the copper fort and the lead fort, there is a medium sized forest. This forest has infinite numbers of sandalwood trees and this forest is known as “candanavāṭikā”, the forest of sandalwood trees (candana means sandal and vāṭi means an enclosure).  This forest has a number of bees, doves, etc. This forest is extremely hot because of intense heat of the sun.  In this enclosure, we are able to see Grīṣmaṛtunāthan (god presiding over summer season, known as grīṣmaṛtu) and his two wives Śukraśrī and Suciśrī. After worshipping them, we proceed to the entrance gates of the next fort, the lead fort.

Lead fort is the fourth fort and is equally lengthy like any other forts. We walk through this fort to reach the exit gate. After passing through the exit gates of this fort, we see the brass fort, situated miles away from the point, where we are standing. We are now entering the forest area between the lead fort and the brass fort. This forest too has sandalwood trees and this forest is known as “haricandanavāṭikā”.  Haricandana trees are one of the five trees of paradise. The other four trees are Pārijāta, Mandāra, Saṃtāna, and Kalpa. Haricandana trees are yellow in colour and are different from candanatrees and produce yellow coloured sandal. In this forest, there are a number of cuckoo birds, which sing in chorus. Inside the forest, we are able to see Varṣaṛtunāthan (god presiding over rainy season) along with his wives Nabhaśrī and Nabhasyaśrī. After worshipping them, we now proceed to the main gates of the brass fort.

Brass fort is the fifth fort and as we walk through this fort, we reach the exit gates and enter into an open space. From the exit gates of this fort, we are able to see the fort of pañcaloha (combination of five metals copper, brass, tin, lead and iron; there are other versions as well by including gold, silver, etc). We now enter into the forest area between brass and pañcaloha forts, which is known as “mandāravāṭikā”. This is full of coral tress that can be seen only in heavens. This is one of the five trees of heaven and cannot be seen in other worlds. The flowers of these trees are highly fragrant. When we go around this forest, we see Śaradṛtunāthan (god presiding over autumn season) along with his wives Iśaśrī and Ūrjaśrī constantly worshipping Parāśakti with fragrant flowers. After worshipping them, we now move towards the entry gates of pañcaloha fort.

We walk through pañcaloha fort and reach its exit gates. After crossing the huge exit gates, we are able to see another huge fort made of silver (seventh fort), situated miles away. We now enter the forest area between pañcaloha and silver forts. This forest is full of pārijāta trees and this forest is named after these trees as “pārijātavāṭikā”. This flower is also one of the five tress of heaven and its flowers are large crimson flowers. This forest has very cold weather. Here too, a lot of cuckoo birds sing in chorus. As we walk through pārijātavāṭikā, we are able to see Hemantaṛtunāthan along with his two wives Sahaśrī and Sahasyaśrī. After worshipping them, we now reach the huge entry gates of silver fort.

We walk through this silver fort and after exiting from the fort, we are able to see another huge fort made of gold (eighth fort), which is glittering and shining. We now enter another forest area by name “kadambavipinavāṭī” (vipina means thick and this forest is very dense) situated between silver and gold forts. Parāśakti is extremely fond of this forest. Lalitā Sahasranāma (60) says, Kadaṃbavana-vāsinī, which means that She lives (sojourns) in this Kadaṃbavana. This forest is different from the previous ones. The flowers in this forest are highly fragrant in nature and have a large quantity of pollen. As a result, a lot of honey is produced and there is a huge falls in which only red coloured honey flows. While we are awestruck with the beauty of this forest, we also see Śiśiraṛtunāthan along with his wives Tapaśrī and Tapasyaśrī. We worship them and reach the main entry gates of the gold fort.

Thank you for pointing out the errors. These have now been addressed. It ... Read More.

Namaste krishna guruji There are some errors which have crept into this ... Read More.