By this practice, kuṇḍalinī will not ascend. This will activate prāṇa-utthāna to clean citriṇī nāḍi; during this process, not only citriṇī nāḍi is cleansed and purified, but also iḍa and piṅgala are blocked. This prevents any possible kuṇḍalinī syndrome.
Take the sitting posture as discussed in the previous parts. Do yogic breathing. Breathing has to be slow and deep. First few rounds of breathing may not be slow and deep. When breathing becomes slow, fix the attention on the ājñā chakra using śāmbhavī mudra (with closed eyes). This is not exactly śāmbhavī mudra, as there is a modification. In this modified form of mudra, which is neither śāmbhavī mudra nor nāsāgra dṛṣṭi, first fix the concentration on the pineal gland (ājñā chakra) using both the eye balls (pineal gland is discussed in part 9 of this series). After a minute or two, shift the attention to anāhata chakra (heart chakra). Continue to fix the attention there. Without moving the awareness from heart chakra, inhale and exhale. At the time of inhalation, visualize that cosmic energy is entering into the body and at the time of exhalation, visualize that citriṇī nāḍi is being cleansed. Both these visualizations are to be done on the spinal cord. When our attention is fixed at anāhata chakra, following happen. 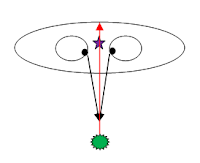 This image explains this practice. Violet colour star just above the central point of eyebrows is the ājñā chakra, behind which pineal gland is situated. Two downward black arrows indicate the focus of the eye balls on the heart chakra, which is in green colour. The red colour upward arrow is the upward movement of prāṇa cleaning citriṇī nāḍi. It can be observed that when prāṇa ascends from the base chakra, it traverses through ājñā chakra and then to sahasrāra. This process is called prāṇa-utthāna or ascension of prāṇa.
1. As we are focussing on ājñā chakra, it becomes fully active.
2. As we are not using any force to awaken the kuṇḍalinī, it continues to remain in its hibernated state.
3. Deep inhalation and exhalation work on prāṇakuṇḍalinī at mūlādhāra chakra to become active and as a result, prāṇakuṇḍalinī moves up through citriṇī nāḍi. When prāṇakuṇḍalinī enters citriṇī nāḍi, activities of iḍa and piṅgala are annihilated. When iḍa and piṅgala are blocked, the only way for prāṇakuṇḍalinī to move up is through citriṇī nāḍi and thus, kuṇḍalinī syndrome is averted.
4. When this is perfectly practiced, the passage of kuṇḍalinī is completely cleared of any blockages and when parakuṇḍalinī ascends, it ascends with ease and to higher chakras.
5. When prāṇakuṇḍalinī moves through the citriṇī nāḍi within the spinal cord, it goes up to sahasrāra and cleanses the entire path of parakuṇḍalinī.
When the path of Kuṇḍalinī is cleansed, Kuṇḍalinī can be activated with ease and confidence.

Only a priest who performs these rituals will be able to tell you the ... Read More.

Sapindikaranam of my paternal uncle (my father's younger brother), who ... Read More.

True. May amba bless us all. Sri Mathre Namah.

This entire website is a humongous and tireless effort of Shri V. Ravi ... Read More.

I agree with your viewpoint sir. Lalitā Devi is both Śakti and Śiva. ... Read More.

Don't you think after all of this I understand the concept of Sakthi, ... Read More.

To explain the transition from the vimarśa-rūpa to the ... Read More.

In one of your old replies at Parashodashi mantra webpage, you yourself ... Read More.