After having cleansed citriṇī nāḍi (within suṣumna), we have to begin the process of cleansing our psychic chakras. This article discusses about cleansing chakras. Chakras should not have any blocks and should be able to spin freely. However, we must also remember that these chakras are only psychical in nature and do not exist in the form of wheels. These chakras are connected to endocrine glands. All the endocrine glands function under the control of pituitary gland, which is situated just below the pineal gland. Please look at the image 1. 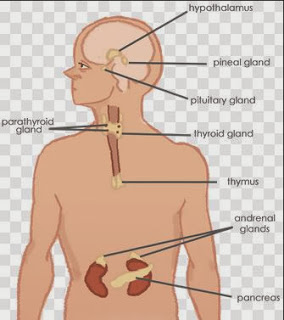 IMAGE 1
Both pineal and pituitary glands are situated very close to each other behind ājñā chakra, in the middle of the skull. Please refer image 2 below.

IMAGE 2
When pineal gland is activated, pituitary gland also becomes hyper active. Pituitary gland is also known as the master of all endocrine glands. Let now have a look at how each chakras are associated with different endocrine glands.
All these glands are under the direct control of Pituitary gland, which is related to sahasrāra. In the last article we have discussed about prāṇa-utthāna or ascension of prāṇa from mūlādhāra chakra. This was dealt with in the last section of the previous article which can be read here: Kundalini Meditation – part 10. Understanding this part as well as Kundalini Meditation – part 3 are extremely important before proceeding to cleanse the chakras. In part 3, nāḍi śodhana prāṇāyāma is discussed in detail. Without practicing nāḍi śodhana prāṇāyāma, progress in kuṇḍalinī meditation may not be significant and often one ends up only with prāṇa-utthāna, which is nothing but an illusionary or deceptive ascension of kuṇḍalinī. Often we are misled by pulsations, twitches, pricking sensation, build up of pressure, etc at ājñā chakra. These symptoms are mostly due to prāṇa-utthāna. However, this also could signify that kuṇḍalinī is ready to ascend. These symptoms and experience vary from person to person. Generally, one can find out whether his or her kuṇḍalinī is ready to ascend. As already discussed, the ascension of kuṇḍalinī primarily depends upon the depth of love for Divine, which can be experienced by tears, sobs, cries and goose bumps (goose pimples).
Now let us begin the process of cleansing psychic six chakras mentioned in the chart. Let us have a look at the image below. 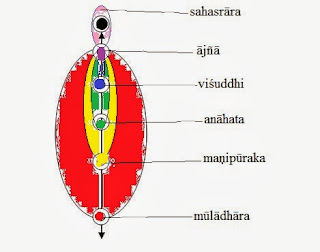 IMAGE 3
This is the side view of psychic chakras, where face is at the top marked in black. Above the face sahasrāra is marked and other chakras are marked below sahasrāra and ājñā.  In the previous article, we have learnt to cleanse citriṇī nāḍi. In the above process only citriṇī nāḍi was cleansed. Cleansing chakras are important because, they spin in such a way to aid the ascension of kuṇḍalinī as smooth as possible. In fact these chakras either decrease the speed of the kuṇḍalinī or increase the speed of the kuṇḍalinī depending upon various physical and psychological factors of the person concerened. These factors are directly related to mind and physical strength of the body. Therefore, chakras can spin both clockwise and anticlockwise and many times we may not be even aware of how chakras spin. When they spin, they produce extensive energy. For example, when anāhata chakra is active, energy of love is manifested.
In the previous article, we have cleansed citriṇi nāḍi from ājñā chakra and also energised it. Using ājñā chakra, we have to cleanse other chakras. Posture explained in the previous article is to be strictly followed. But there is going to be some change in the breathing pattern. Here inhalation and exhalation will be connected to ājñā chakra and with any one of the other chakras below and sahasrāra above.
We have to visualise that we are inhaling and exhaling through ājñā chakra. First let us cleanse mūlādhāra chakra. Concentrate on ājñā and mūlādhāra and visualize an oval shape track connecting these two chakras, as mentioned in the image 3  above and image 4 below. The red coloured oval shape shows how ājñā and mūlādhāra are to be connected. Using both the eyeballs, fix the attention on ājñā chakra. Inhale through ājñā chakra and this inhalation is to be visualized, as the air we inhale enters only the lungs. Now exhale to mūlādhāra chakra which is to be visualised again. Consciousness should be fixed on mūlādhāra chakra till the entire air is exhaled. While shifting the consciousness, use both the eye balls. To explain this further, both the eye balls should be fixed at one chakra at a point of time. This is further explained below. There are several steps involved and let us understand this step by step.
1. Each chakra including sahasrāra is to be cleansed from ājñā chakra, which has already been energised in the previous part.
2. At the time cleansing a particular chakra, consciousness should move from ājñā to that particular chakra and back. For example, let us take mūlādhāra chakra. To begin with, after taking sitting posture as explained in the previous part and after performing nāḍi śodhana prāṇāyāma, we have to move to the next step of cleansing mūlādhāra chakra. Eyes are to be closed.
3. It is assumed at this point that we do only yogic breathing. Without yogic breathing, chakras cannot be effectively cleansed.
4. To begin with we have to energize ājñā chakra first. After energising ājñā chakra, visualize a oval shape, connecting both front and back sides of the body. This can be seen in the image 3 above.
5. Now move the eye balls along the visualized line. In the case of mūlādhāra chakra, this line can be noticed outside red area. Red represents mūlādhāra chakra. It can be observered that when outer lines are connected, an egg shape or an oval shape can be noticed. The shapes of the eggs get reduced when we move closer to ājñā chakra. Technically, it can be explained that due to the decrease in the distance between ājñā chakra and the respective chakra. For example, let us take anāhata chakra, which is much closer to ājñā than mūlādhāra. This can be compared to altitude of a descending aircraft while landing.
6. Let us now begin the process of cleansing mūlādhāra. To begin with, inhale through both the nostrils, using yogic breathing method. Move down the eye balls along the visualised oval shaped line marked B to mūlādhāra (marked C) from ājñā, marked A in the image 4 below. On the left is the back of the body and on the right is front of the body. While moving down the eye balls towards mūlādhāra, exhale and on reaching mūlādhāra, exhalation should have been completed. Exhalation should sync with the movement of eye balls (consciousness or attention). When exhalation is complete on reaching mūlādhāra, stay at mūlādhāra for a few seconds. This is known as bāhya kumbhaka, as no breath is held within the body. This practice is explained in figure 4 below. We use both bāhya kumbhaka and antar kumbhaka throughout this practice.

IMAGE 4
7. Now lift the consciousness from mūlādhāra to ājñā along with inhalation through the front of the body in the oval shaped visualized line D and end at ājñā chakra, marked A. Continue to remain with antar kumbhaka at ājñā chakra for a few seconds. This completes one round.
8. Like this one has to practice three rounds.

IMAGE 5
9. Now, the entire process is be reversed. In the previous practice, we synced exhalation while moving consciousness from A to C via B and synced inhalation while moving consciousness from C to A via D. In this practice this to be exactly reversed. Inhale at ājñā chakra, move consciousness and exhalation via D to C from A. Stay at C with bhaya kumbhaka for a few seconds and move consciousness syncing with inhalation from C to A via B. This is to be repeated three times.
10. Three times referred in 8 above and three times referred to 9 above makes one round of cleaning of one chakra.
11. The same procedure is to be adopted for all other charkas, including sahasrāra.
This may appear confusing, but if understood, this can be easily practiced.
Precautions:
It is quite possible that one may feel drowsy or giddiness while practicing this. If intensity of giddiness is more, open the eyes and resume after sometime. Reduce the number of rounds. Stomach should be empty while practicing this. It would be ideal to practice this for all the chakras and sahasrāra in one sitting. This practice may not take much time.
At the end of this practice, we would have cleansed citriṇi nāḍi as well as all the psychic chakras. The next step would be to ascend the kuṇḍalinī with mild force. Sometimes, depending on the intensity of love for the Divine, kuṇḍalinī may ascend after completing both the cleansing processes (citriṇi nāḍi and psychic chakras).
It would be ideal to practice this both in the morning and in the night.

Sir thanks for sharing this wonderful Kavacham this will be useful to ... Read More.

Practices such as Apsara or Yakshini sadhana should be performed only ... Read More.

Although I’m not sure if that author is authentic

Look at this book about Apsara Urvashi Sadhana. ... Read More.

Sir are you able to post a apsara or yakshini mantra

Dear sir, this is an extremely potent mantra that is generally given by a ... Read More.

Hi, could you please send me audio for maa van durga mantra and share your ... Read More.

Prāṇapratiṣṭha is for the Yantras only. You can use the generic ... Read More.

In my opinion, this mantra is for the Divine Mother Siddhalakṣmī, the ... Read More.