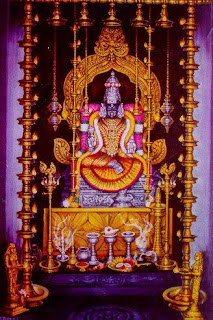 Śrī Mātā, Thy name is Lalitāmbikā. Her name is disclosed by Vāc Devi-s only in the last nāma. All along She was known to us as the Supreme Mother who was portrayed through Her gross and subtle qualities. Lalitā means sported, played, playing, wanton, amorous, innocent, soft, gentle, charming, lovely, wished for, desired, quivering.  Every one of this meaning perfectly fits Her nature and form.  She was described as saguṇa Brahman (Brahman with attributes) and nirguṇa Brahman (Brahman without attributes with eternal purity). Though the Brahman is One, He has been demoed as two, merely to understand Him to the best possible level. If someone claims to know the Brahman thoroughly, he has to be dismissed as the Brahman is beyond comprehension by normal human mind. It is easier to say that the Brahman is without form, but the conceptualisation becomes difficult.  In order to understand the Brahman, more has been said about His kinetic aspect rather than the static aspect. This Sahasranāma dwells more on the kinetic aspect of the Brahman rather than the witnessing aspect of the static Brahman, though both happen contemporaneously.
The first nāma of this Sahasranāma started with creation by addressing Lalitāmbikā as Śrī Mātā, the next nāma discussed about sustenance and the third nāma subtly conveyed the act of dissolution. Vāc Devi-s conveyed through nāma-s 4 and 5, the other two aspects of the Brahman, annihilation and recreation. Thus in the first five nāma-s, the primary qualities of the Brahman have been explained, though not explicitly. These three acts are again mentioned in nāma-s 264, 266 and 268.
Every energy that prevails in this universe has originated from Her and every action that happens in the universe happens because of Her (nāma 895). Even the most revered Veda-s not only originated from Her (nāma 338) but also worship Her (nāma 929).  She is the embodiment of compassion (nāma-s 197, 326), yet She cannot be taken for granted. She is also tough at times and punishes the guilty (nāma-s 288, 608, 755). All the letters and their sounds (nāma 640) originate from Her (nāma 577). Hence She is called the embodiment of mantra-s (nāma-s 88, 204, 227, 846).  All gods and goddesses worship Her (nāma 83, 629). She can be attained only though pure and unstinted devotional mind (nāma-s 118, 119 and 120). The one without devotion cannot even go anywhere near Her (nāma-s 188 and 189). The very thought of Her brings in auspiciousness (nāma 682).  When She is worshipped with purity and dedication, She gives liberation (nāma-s 838, 839).
She should be worshipped in private. When one really wants to realise Her, he has to begin with Her ritual worship. He has to then proceed to recitation of Her mantra-s like Pañcadaśī and ṣodaśī.  Finally, one has to visualise Her with the help of these one thousand nāma-s. Typically, one method of worship will lead to the next on its own. The mindset of the practitioner is more important than any extraneous considerations. She is subtler (nāma 322) and the subtlest (nāma 110).  Her subtle manifestations have more to do with one’s mind rather than involving in laborious rituals.  She does not want to look at what one does, but She observes what one thinks.  Attaining pure knowledge (nāma 416) is the only way to know Her. All the Upaniṣads repeatedly stress the importance of knowledge to realise the Brahman, as the mind alone is capable of knowing the Brahman.  Saundarya Laharī (verse 98) prays, “Oh! Mother! Tell me when shall I, seeking knowledge, drink the water cleansing Your feet.”  The unique feature of the Divine Mother is Her holy feet.  She wipes out pains and miseries of Her worshippers by Her feet. When She is worshipped through heart and mind, the worshipper is ‘endowed with long life with his association with the soul, and his ignorance cast away, he enjoys the sweetness of what is known as the Supreme Bliss’ (Saundarya Laharī verse 99).
Adoring Her in silence within, is the only way to surrender to Her.  Too much of speech, too much of thought and too much of action cannot subjugate the mind. When the mind is not subjugated, the senses cannot be controlled. Senses have to be necessarily used for our normal existence, but indulgence makes a person addictive. One has to be in the thick of the world, yet one has to maintain perfect serenity of mind. Any work performed with detachment to the end result of the work, does not cause mental affliction. An obnubilated thought process does not provide a serene environment to transform normal consciousness into pure consciousness, where alone She can be realised. The absolute consciousness which is Self-awareness destroys the ego and bestows liberation. When ‘I’ consciousness vanishes, direct vision of Śrī Mātā, the Creator takes place, bringing in contentment and compassion leading to interminable bliss.
This completes the interpretation on Her one thousand auspicious nāma-s that is now placed at Her sanctifying lotus feet praying for all-round happiness and prosperity and peaceful co-existence.

Sir thanks for sharing the rare information. I was only aware of ashta ... Read More.

Sir, I was just searching for some stotras for my children, for education ... Read More.

We missed the letters 'mama'. It has been fixed now throughout the ... Read More.

Hi. Namaste!!! I indeed would love to see it on video. Is there anywhere? ... Read More.

Sir it has twenty letters how it can be dwavisathyakhari mantra....22 ... Read More.

Yes, we will do this and publish very soon.

Thank you for pointing out the error. It has now been rectified.

Namasthe. The Sanskrit verses are missing in this page. Can you please add ... Read More.