If we go by nine āvaraṇa-s, they can also be classified as Śiva and Śakti āvaraṇa-s. Some texts refer these āvaraṇa-s as cakra-s. Āvaraṇa-s 1, 2, 3 and 9 (bindu) are Śiva āvaraṇa-s and āvaraṇa-s 4, 5, 6, 7 and 8 (innermost triangle) are Śakti āvaraṇa-s. Let us look at this from grosser perspective. Śiva, by remaining inside the innermost triangle as the bindu, protects Lalitāmbikā from the outer side by forming the first three āvaraṇa-s. This also goes to prove that everything originates from Śiva, protected by Śiva and dissolves unto Śiva. Basically, this is the principle of Śri Cakra. Though Śiva is the cause, we cannot directly go to Him. We have to necessarily go through Parāśakti. It only She, who imparts the ultimate knowledge known as Śivajñāna and it is She, who imparts this knowledge and hence She is known as Śiva-jñāna-pradāyinī (Lalitā Sahasranāma 727). Hence, Śri Cakra is predominantly worshiped by those who aim for liberation from transmigration.

The above discussion pertains to Śri Cakra. Now let us understand how to correlate Śri Cakra with our subtle body. Already we have discussed in the previous part that the nine openings in a human body represent Guru. That is with regard to gross body. The nine forms discussed in this article is about nine śakti-s (powers or psychic powers). If we discuss from this point of view, then it would be appropriate to say “navaśaktimayaṁ śrīcakram” instead of “navacakrarūpaṁ śrīcakram”. Cakra not only means a wheel, but also means subtle energy (śakti also means energy) centres in the body. Most commonly known psychic centres are six in number, beginning from mūlādhāra cakra to ājñācakra and the seventh one sahasrāra, at the top of the head, which is not included for the purpose of calculating psychic centres. It is not a centre, but is the Seat of Śiva.

The first six psychic centres are well known and they are mūlādhāra, svādhiṣṭhāna, maṇipūraka, anāhata, viśuddhi and ājñā cakra-s. Between ājñācakra and sahasrāra, there are seven subtle centres. If we include both ājñācakra and sahasrāra, then there are nine subtle centres. These nine subtle centres are known as bindu (ājñācakra), ardhacandra, rodhinī, nāda, nādānta, śakti, vypāpikā, samāna and unmanā (sahasrāra). The nine subtle forms that we are discussing about in this verse could also mean these nine subtle centres. Interpretation of these nine forms is based on the spiritual attainment of the practitioners. For those on the elevated spiritual level can go with these nine psychic centres from ājñācakra  to sahasrāra, and those who are yet to be spiritually elevated can go with nine forms beginning with mūlādhāra to sahasrāra. The ultimate end is only sahasrāra. For the second category of practitioners, apart from including the lower six psychic centres up to ājñācakra, mind cakra and lunar cakra are included along with sahasrāra, thus making a total of nine chakras. Mind chakra and moon chakra are situated above ājñācakra, one above the other. It is important to remember that Lalitāmbikā has three types of forms, gross, subtle and subtlest. Gross form is the nine apertures in the human body that correspond to Śri Cakra. Her subtler form is kāmakalā (intertwining of nine triangles) and Her subtlest form is kuṇḍalinī. During Her journey from the base chakra to sahasrāra in the form of Kuṇḍalinī, manifestation of the universe takes place. Meditating Her in the form of Kuṇḍalinī in the nine psychic centres is known as antaryāgaḥ (internal oblations), which is more powerful that external oblations.

If we proceed to think further, we can find out that these nine triangles of Śri Cakra give rise to nine forms of Kālī known as Navakālī, nine forms of Durgā, Navagrahā-s, etc.

So far in this series, as well as in the previous series (Journey to Śri Cakra), we have not discussed about a few aspects. The first one is about trivalaya also known as tirvṛtta, the three circles or rings immediatly after the first āvaraṇa. There are difference versions regarding these circles. Many are of the opinion, that these three lines represent worldly affairs and are to be ignored. Different traditions adopt different views on these three circles. In Ānadabhiarava tradition, they are present but not worshiped. In Hayagrīva tradition, they are not even present. In Dakṣiṇāmūrti tradition, they are present and worshiped, but not taken into account as an āvaraṇa. There are sixty one śakti-s, who are present in these three circles. Tradition is known as sampradāya and thus we have three main sampradāya-s and they are Ānadabhiarava sampradāya, Dakṣiṇāmūrti sampradāya and Hayagrīva sampradāya. Which sampradāya one follows can be known by the mantras practiced. Generally, they become the ṛṣi of that particular sampradāya.

Another aspect which we have not yet discussed is about krama-s. Krama means course or procedure followed step by step. Śri Cakra is worshiped in three types of krama-s. Most commonly worshiped krama is saṁhāra krama, where the worship begins from first āvaraṇa and goes step by step towards the bindu (ninth āvaraṇa). This signifies liberation of individual soul. This is because from the material world, we move towards Śiva and ultimately get absorbed into Him. Saṁhāra means absorption or binding together. This refers to the union of individual soul and the Self, and in this case it is the union of jīvātman with Śiva (Paramātman) through Śakti. The second krama is sthiti krama, where sthiti means continued maintenance or existence. In this krama, worship begins from the first āvaraṇa, proceeds up to seventh āvaraṇa; then the worship begins from the ninth āvaraṇa, the bindu and ends at the fourth āvaraṇa, in the reverse direction. The last krama is sṛśṭi krama, where the worship begins from the bindu (ninth āvaraṇa) and ends at the first āvaraṇa.

Coming back to the discussion on this verse about the nine subtle psychic centres, we already know about the first six chakras, from mūlādhāra to ājñācakra.  Above ājñācakra, there are two very powerful psychic centres known as manascakra (mind) and somacakra (moon). These two centres are one above the other. There is always a direct relation between mind and the moon. There is a strong connection between these two chakras. If the mind chakra is calm and composed without any agitation, soma chakra becomes highly active and begins to secrete nectar like substance, which flows down the throat after crossing mind chakra and ājñācakra. This nectar like substance is known as amṛtavarśiṇi. Somacakra has sixteen kalā-s, corresponding to the fifteen tithi-s (lunar days) and Lalitāmbikā or corresponding to the sixteen Sanskrit vowels. These sixteen kalā-s are worshiped during the preparation of viśeṣargḥya during navāvaraṇa pūjā. These two chakras determine the mind and spirituality of a person. Without activating these chakras, mind cannot be cleansed. Once the mind is purified in these chakras, kuṇḍalinī ascends to sahasrāra to complete the process of union between Śiva and Śakti. This is the union of individual consciousness with the Supreme Consciousness. This is liberation.

There are two marma (also known as varma) points known as sthapanī, one exactly at ājñācakra and another one at manaschkara (midpoint of the forehead). Applying slight pressure in circular motions on these two points controls the mind. Almond oil or sesame oil can be used to massage these two points. If there are any issues relating to kuṇḍalinī syndrome are present, this massage will relieve all types of syndromes related to kuṇḍalinī. One can meditate on these points by reciting īṁ (ईं). There is a specific way of reciting īṁ, which is known as Śākta praṇava. While reciting īṁ, emphasis should be given on ṁ by prolonging the recitation of ṁ. While doing so, eyes should be closed and by focussing and concentrating on ājñācakra, one should push the breath towards sahasrāra.

With this, correlation between nine triangles of Śri Cakra and nine psychic centres of the human body is completed. 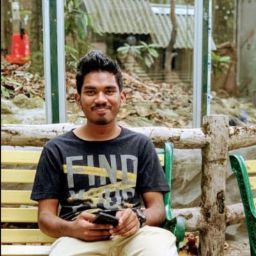 do u mean the mantra sadhana is more powerful than kavacha recitation?

Thank you sir. Is ṣoḍhā nyāsa same as ... Read More.

Namaste Guruji: Thank you for your timely advise. Having completed the ... Read More.

You may skip those sections if you are counting on your fingers. I would ... Read More.

This rule is applicable only to Panchadashi and Shodashi mantras.

Namaste Poojya Guruji, towards the end of the above article it's ... Read More.

Sir, if I am not using any japa mala and want to count with my fingers ... Read More.

Sir,can you give information of guru who can provide bhuvaneshwari devi ... Read More.

There is only and only one way for Guaranteed results is by practicing ... Read More.