(This has already been referred in the previous part. Now, relevant mantras and procedures are being discussed.) 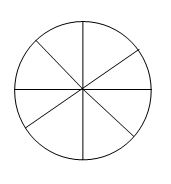 A copper or silver plate and rice or wheat flour, milk, nine wicks, ghee and camphor are required. Mix flour with milk and sugar and make dough. Using the dough prepare nine triangle shaped lamps. They should be designed in such a way that there is some space available to pour few drops of ghee in the middle. These lamps should be arranged like eight petal lotus and the ninth lamp should be placed in the centre. Individual lamps should be made like a damuru. There are other variations in this arrangement. Now, the wicks are to be dipped in ghee and smeared with camphor at the tip of the wicks. In the space available in each of these lamps for ghee, a few drops of ghee are to be poured and wicks are lit. It is to be ensured that all the nine lamps burn simultaneously and with the same kind of flame. When the lamps are lit, “ह्रीं hrīṁ” is to be recited. This should be recited while lighting all the nine lamps.

After completing the recitation, show chakra mudra to the lamps.

Now recite mūlamantra by touching the plate (abhimantraṇa means abhi-mantraṇa-mantra; making anything sacred by a special formula or consecrating). Now take the plate and rotate clockwise nine times in front of (like dipārādhana) Kāmeśvarā and Kāmeśvarī (if idols are available) and Śri Cakra by reciting two mantras. First mantra is the first verse of Durgā Sūktaṁ.

After having done this, we have to place the lamp to our right.

Āyatana means resting place or abode. Every place and every being is āyatana of Śiva. As we know that there are five types of śakti-s – citśakti, ānandaśakti, icchāśakti, jñānaśakti and kriyāśakti. The first three śakti-s along with the last two śakti-s are responsible for creation. These five śakti-s are known as Śiva, Śakti, Sadāśiva, Īśvara and Śuddhavidyā respectively. Technically, worshiping these five śakti-s is known as pañcāyatana pūjā. Therefore, pañcāyatana pūjā means worshipping the five primary principles of creation, as mentioned above. Śiva alone is Absolute and the rest have originated from Him. He alone pervades the entire universe. He is Cit (Absolute Consciousness) and Śakti is full of Bliss (Ānandaśakti). Both of them are known as Saccidānanda, who pervade the universe. In order to let us know that the whole world is permeated by Saccidānanda and no object or being is different from Saccidānanda, pañcāyatana pūjā is performed. There are three types of pañcāyatana pūjā – Śiva, Śakti and Viṣṇu pañcāyatana pūjā-s. In any pañcāyatana pūjā, five Gods are worshiped and they are Śiva, Śakti, Viṣṇu, Gaṇeśa and Sūrya. The presiding deity is placed in the middle and other deities are worshiped clockwise beginning from North East (īśāna), South East, South West and North West.

In navāvaraṇa pūjā, which is performed to attain Her Grace and Compassion, instead of pañcāyatana pūjā, caturāyatana pūjā is performed, as Kāmeśvarī is majestically seated in the middle of Śri Cakra along with Mahā-Kāmeśvara. Theoretically, caturāyatana pūjā is Śakti pañcāyatana pūjā. Kāmeśvarī is worshiped in the middle, Gaṇeśa in nirṛti (South West), Sūrya in vāyu (North West), Viṣṇu in īśāna (North East) and Śiva in agni (South East). Gaṇeśa is the chief of gaṇa-s, who protects the universe (14 worlds). He is an embodiment of knowledge. He is not only the obstacle remover, but also causes obstacles. Hence, he is worshiped first in order to remove any possible obstacles. (However, for a true devotee no obstacles will be there in his spiritual path; however, he has to undergo the pains and sufferings of life due to his or her individual karma and the group karma - group means society as well as relationships). Sūrya (the sun) has the ability to create and he rules the world along with his consort Savitā. Since he is the creator (creator contextually does not refer to Brahman), Sūrya is worshiped. Viṣṇu is the sustainer of the universe and hence Viṣṇu is worshiped. Śiva is worshiped as Rudra, who alone is capable of annihilating the universe, hence He is worshiped. Śiva has multiple manifestations, from a subordinate staff to the chief executive. Though He is known through different names such as Sadāśiva, Īśvara, Mahādeva, Īśāna, Kāmeśvara, Bhairava, etc, all these forms are different manifestations of Śiva only. Hence Śiva is worshiped. Parāśakti is worshiped in the centre, in the innermost triangle of Śri Cakra. She is the embodiment of everything that prevails in the universe. She gets Her energy from Śiva and She acts on behalf of Śiva. She gives spiritual knowledge and bliss. Without Her Grace, liberation cannot be attained. She is Prakāśa Vimarśa Mahāmāyā Svarūpini. The very purpose of navāvaraṇa pūjā is only to contemplate Her perpetually, setting aside attachments to material world (normal living is not material attachment; if we do not live normal materialistic life, Kṛṣṇa will be angry with us as we would be violating His teaching on karma yoga!)

This is the most significant aspect of navāvaraṇa pūjā.  Hereafter, at the end of every mantra pūjanaṁ and tarpaṇaṁ are to be done. Flowers are to be taken in the left hand. In the right hand, tweezers is to be taken with a piece of ginger held between the tweezers. At the time of saying pūjayāmi flowers from the left hand are to be placed. At the time of saying tarpayāmi, the ginger piece is to be dipped into viśeṣa arghya using the tweezers and a drop of viśeṣa arghya is to be offered in the same place where flowers are placed. This is further explained in Gaṇeśa pūjā.

(to be recited three times)

Now take flowers in the left palm and place the flowers, where Gaṇeśa idol is kept (nirṛti - South West) and simultaneously take amṛta using a tweezers made of either silver or copper. This is meant to perform tarpaṇa. Instead of a tweezers, a thin silver rod with spikes on one side and a very small uttaraṇi like structure which can hold one or two drops of viśeṣa arghya can also be used. At the end of the tweezers peeled ginger should be placed firmly. The tip of tweezers is dipped into viśeṣa arghya, a drop of amṛta is taken and immediately placed in the place where flowers are placed. This procedure is known as pūjayāmi and tarpayāmi. In fact, both pūjanaṁ and tarpaṇaṁ should be done simultaneously.

(Any verses and hymns in praise of Gaṇapati such as Śrī Gaṇeṣātharvaṣīrṣam can be chanted at this point. Similarly verses, hymns and Veda mantras can be recited while doing pūjā-s to Sūrya, Viṣṇu and Rudra).

{From this point onwards, naivedya should be kept ready for every upacāra. There will be a need of 14 sets comprising of 4 (caturāyatana pūjā) + 9 (for nine āvaraṇa –s) + 1 (after completing pūjā for all the nine āvaraṇa –s; this is the main one) dhūpa , dipārādhana, naivedya and nīrājana; necessary materials should have been kept ready).

(following spptn to be done 12 times; there are texts which say only 3 times; ultimately Guru’s words alone count)

Puruṣasūktam can be recited here.

Śrī Rudraṁ can be recited here.

Some do not perform this pūjā. layāṅga comprises of laya and aṅga; laya means absorption and aṅga means body, mind, etc. Therefore layāṅga means absorption into Brahman. The very purpose of performing navāvaraṇa pūjā is to get absorbed into Brahman, setting aside the body and mind. Only to accentuate this point, layāṅga pūjā is prescribed. This principle can be interpreted from the point of view of Trika philosophy (triads). All the triads originate from the innermost triangle and bindu of Śri Cakra. Bindu is both Prakāśa and Vimarśa (Śiva and Śakti), the source of kāmakalā (īṁ ईं). The universe originates from Bindu and dissolves into Bindu. Keeping this philosophy in mind, layāṅga pūjā is done. Bindu is worshiped three times at this point. The first pūjanaṁ and tarpaṇaṁ is for the union of Kāmeśvarā and Kāmeśvarī; the second one is for kāmakalā, the source of creation; the third one is identifying ourselves with the universe. Self-realization does not end with the realization of the Self within. Self-realization also means of identifying universe with the Self. The Self, the individual self (the Self within, veiled by māyā; this is known as individual soul) and the universe. Ultimately, individual soul and the universe get absorbed (laya) into the Self. This is the purpose of layāṅga pūjā.

This is to be done three times on the Bindu.

Basically, this pūjā is also based on pañcāyatana, caturāyatana and layāṅga pūjā-s. Ṣaḍaṅga means six parts. The following two nāma-s of Lalitā Sahasranāma speaks about ṣaḍaṅga devata-s.
ṣaḍaṅaga-devādāyuktā षडङग-देवादायुक्ता (386): ṣaḍ (six) + aṅaga (parts) means six parts.  For every mantra there are six parts and each such part is under the control of a god/goddess called aṅaga devatā-s of the presiding deity.  These six parts are heart, head, tuft of hair, arms, eyes and weapons.  Before and after the recitation of a mantra, the deities of these parts are worshipped in our bodies by touching the respective body parts with fingers.  This is with regard to the external worship.  Śiva has six types of known qualities and they are omniscience, completeness, supreme level of consciousness, freedom, everlasting power and infinity.  These six are the qualities of the Brahman without attributes or prakāśa form of the Brahman.  This nāma says that She is surrounded by these six aṅaga devatā-s.  It is important to remember that She is described both as Brahman without attributes or the prakāśa form and as Brahman with attributes or the vimarśa form.

ṣāḍguṇya-paripūritā षाड्गुण्य-परिपूरिता (387) She is endowed with six qualities that are considered auspicious.  They are prosperity, righteousness, fame, material wealth, wisdom and dispassion.  Dispassion because, She will not show any special favours to a select few, transcending the law of karma.  She does not encourage favouritism.

This is to be done at the bindu.

Thank you for pointing out the errors. These have now been addressed. It ... Read More.

Namaste krishna guruji There are some errors which have crept into this ... Read More.

Thank you for the deep insightful description of this nāma. Absolutely ... Read More.

Not to the best of my knowledge. There is however the Kāmākhyā mantra ... Read More.

In general, there are differences found in the versions of the same ... Read More.