Pañcīkaraṇa (Panchikarana) is an interesting theory. Tamo guṇa of the five elements divides into two halves. The one half remains as it is and the other half further gets divided into four parts. The half portion that was not divided conjoins with the one fourth part of the other half of another element. The following chart for space, one of the five elements will explain this. 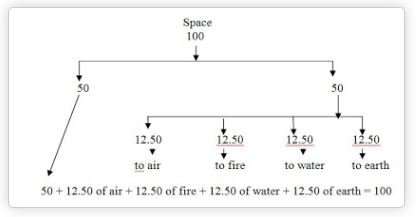 The following will explain the formation of the elements:

The scripture Pañcīkaraṇa (Panchikarana) says, “pañcīkṛta-pañca-mahābhūtāni tatkāryaṁ ca sarvaṁ virād iti ucyate पञ्चीकृत-पञ्च-महाभूतानि तत्कार्यं च सर्वं विराद् इति उच्यते”. It says that virāṭ is the sum total of quintuplicated (five fold) five elements and their effects. It further says, “etat sthulaśarīram ātmanaḥ एतत् स्थुलशरीरम् आत्मनः” which means ‘this is the gross body of the Ātman’. Ātman which identifies itself with the jāgrat state (active state, one of the stages of consciousness) and the sthulaśarīra (gross body) is known as Viśva. The seventeen components that were discussed (series 12) earlier is the subtle body of the Ātman, known as hiranyagarbha. When the Ātman identifies itself with the subtle body during dream state, it is called taijasa.

Tattvabodha thus establishes the identity between microcosm and macrocosm. The individual gross body is called piṇḍāṇḍa (microcosm) and sum total of all piṇḍāṇḍa-s is brahmāṇḍa (macrocosm). The individual soul is nothing but a part of the Brahman and realising this truth is known as Self realisation. Due to the veiling effects of māyā, Ātman continues to forget its true nature.

It's working now thanks

Please refresh the page and let us know if you see anything missing? I can ... Read More.

All photos are missing. Yantra and other one is not appearing

Thank you for pointing out the error. The correction has been ... Read More.

Namaskaram, In this article dhyana shloka, shouldn't the first word be ... Read More.

Sir thanks for sharing this rare spiritual treasure Regards Krishnakant

Thank you very much for your efforts to share this treasure. May the ... Read More.

The bhūta bīja (seed) mantra sphrem̐ is correct in my opinion. But you ... Read More.

Hi sir, please consider this as a special request. Some sources are ... Read More.

You may refer to Tantrarāja tantraṃ for more information on the Nitya ... Read More.